The Devil All the Time is an American psychological thriller film based on the same name by Donald Ray Pollock. The latter also serves as the film’s narrator, from a storyline co-written with the director Antonio Campos’ brother, Paulo Campos. The movie is presently available for Streaming. It can be classified as a multistarrer since it stars Tom Holland, Bill Skarsgard, Riley Keough, Jason Clarke, Sebastian Stan, Haley Bennett, and Robert Pattinson, among others. Critics gave mixed reviews, praising Holland and Pattinson’s performances but condemning the film’s gloomy tone.

Warning! Spoilers ahead for the film, proceed at your own risk! If you love yourself a psycho-thriller genre with violence deep-rooted in the plot, this film is just for you! The film is set in the sixties, and it would be a significant help if we remember that fact. Towards the end, Arvin is haunted by visions of ‘Devils’ and the dead bodies he left to be buried. The greater devil is the culture that Arvin has been brought up in. Robert’s role has been proclaimed as the evil-est character of the film. Is this a happy or sad ending?

What Happens In The End?

The finale is puzzling after a first watch. Arvin (Tom Holland) ends his murder spree by killing a crooked cop played by Sebastian Stan in The Devil All the Time, after killing just about everyone else (he had it coming). Arvin then makes it to a highway and picks up a ride. We hear an address on the radio from the President of the United States declaring that even more troops will be deployed to fight in Vietnam as he sits in the passenger seat, struggling not to fall asleep.

Arvin, who is typically hyper-observant, is letting his guard down, and for the first time in perhaps his whole life, he seems at ease. Arvin’s thoughts are on his childhood and the bodies buried beneath. Perhaps it’s also on his mind as he mulls over the possibility of joining the US Army. The reality is that he is unclear. “Grandma would tell him to pray about it, and he’d scoff at her, but maybe she knew something he didn’t?” says the narrator, seeking to obtain insight into Arvin’s thoughts. He was in desperate need of sleep right now and was just fortunate that someone was willing to give him a ride.

Is this an indication that Tom Holland’s character was enlisted into the Vietnam War after escaping one difficult situation? The conclusion, according to movie director Antonio Campos, is “both.” As the director Antonio Campos explained to Esquire, he seems to have a difficult time with happy endings. Antonio prefers endings that leave you with the prospect of something better and the option of something different, allowing you to create your interpretation of the story. And that is just what he managed to do with this film.

In Search Of A Meaning:

While the film plays on religious beliefs a lot, the title is very condescending with “The Devil” in it. It’s wordplay, describing every character’s evil undertones. The Devil All the Time’s conclusion ties in nicely with the film’s opening sequence, which depicts Arvin’s father, played by Bill Skarsgard, meeting a soldier who had been crucified during WWII. Campos tells us that the film begins at the end of a war, with this horrific scene that this soldier witnesses at the end of a war, and closes with another character who could be about to embark on another war. The film’s conclusion indicates that Tom Holland’s character is on his way towards becoming as messed up as his father while also questioning whether he has to pray or not.

Arvin is very much the product of his father’s upbringing since he is a quiet and skeptical boy after witnessing his father’s piety drive him to suicide. Willard’s mind was gnawing at him as a result of the war. While Arvin never saw Willard being crucified, we know that this violence haunts Willard every time he looks at a cross. This explains his obsessive, morbid fascination with crosses, a constant motif in The Devil of All the Time.

Even if he’s about to be drawn back into the violence that devastated his father in the first place, Tom Holland’s actions reveal he’s moved beyond his father’s fixation. The Director wonders whether there is a great design or if everything happens by coincidence, leaving it up to the audience’s interpretation. 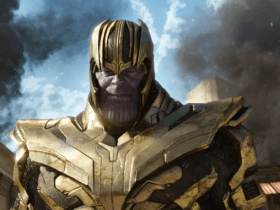